The last few months have been a little light on the creative side of things for me, and even then I’ve been very (very!) lax in updating this site to reflect what I have been involved in. That’s all on me, apologies for that. Before I get into the explanations here’s some of the more notable or interesting things I should have shared a little while back.

Perhaps quite minor but it’s still interesting to me; as part of work we each had to a personality profiling session (Briggs Myers test, I think?), the intention being to compare how we interpret and respond to the world with our colleagues and ultimately work better together as a team. I’m an INFJ, with the official description reading;

Of course there’s a lot more to anyone than five abbreviated sentences could ever sum-up and I had a good hour or so conversation discussing the results. Whilst it confirmed much about me I’d already come to realise -I’m definitely an introvert, prefer things to be planned and organised, internalise thought processes and feelings rather than outright stating what I’m thinking, etc- it’s really interestng to expand on some of that and to put it into context with other people. I’ve barely even skimmed the topic here, I’m conscious that I’m very good at over explaning things (something now acknowledged as a result of this) and there’s a ton of really interesting stuff I could cover, just it’s perhaps not worth doing here when it’s not overly relevant to the blog and there’s so many better resources out there dedicated to it. Definitely go and have a search everyone:)

I’ve uploaded one of my Uni projects to the portfolio page, a cover for the book A Beautiful Constraint. It was proposed as a live brief for us whilst the book was still being finalised, with the potential for becoming the actual cover for the book. That part of things never panned out but it’s still an interesting print-based project. 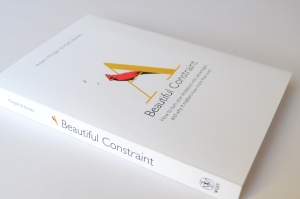 Whilst on holiday with my family back in late May I had a go at creating a candle. The finished thing is something I’m really pleased with, especially the fantastic texturing I achieved by quickly dunking the still setting wax into cold water; that’s the bumps and ripples you can hopefully see in the photos. It does look very ‘Dracula’ (as my Dad put it) but still it’s something I think turned out really well – the texture in particular is fantastic and is part of the reason there’s so many similar looking photos, I really wanted to capture that (perhaps a tad difficult with just a iPod camera and no editing software though). The painted glass was created separately but the intention was to support the candle’s design. 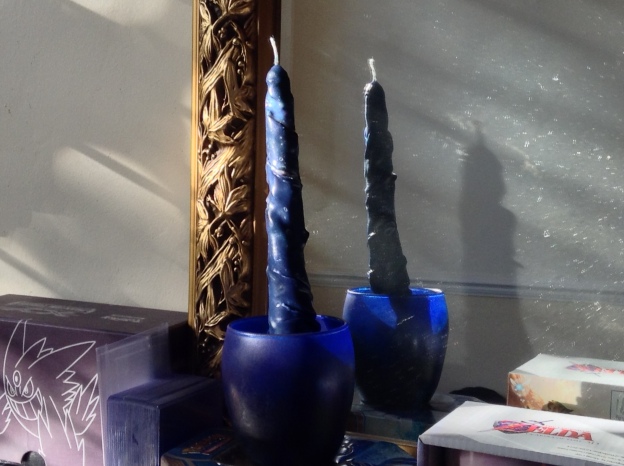 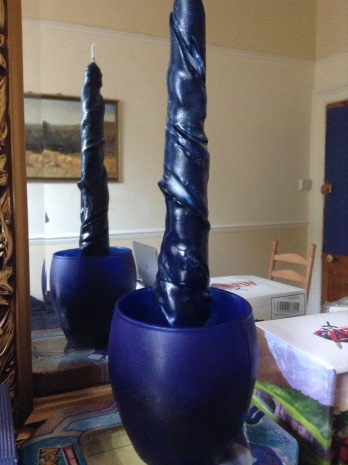 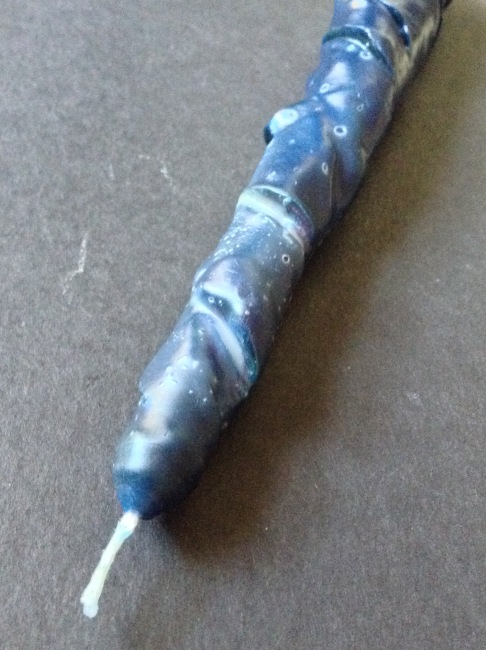 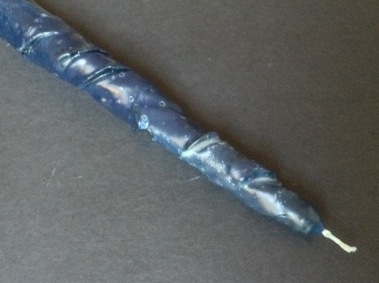 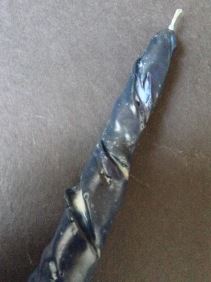 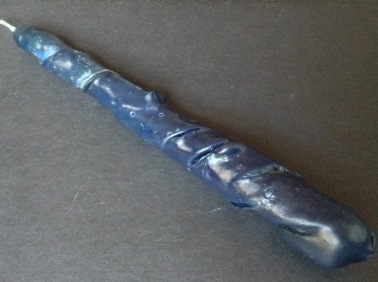 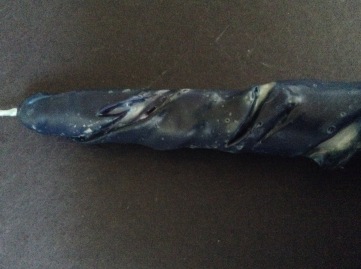 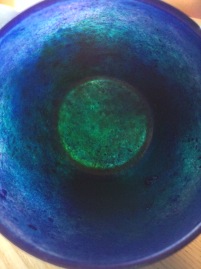 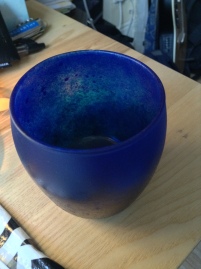 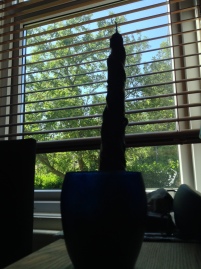 One other minor thing, July was my birthday. Nothing notable in itself, but Mum did make me this card which I thought was really cool- well, it made me smile at the very least. Her explanation was she “didn’t know what to make so just went as childish as possible”. It’s not that clear in the photos but there’s multiple layers of card/fabric creating depth on it and the Pokémon themselves are raised a good few millimetres from the rest of it. 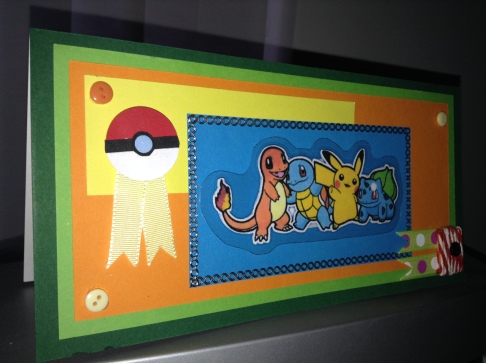 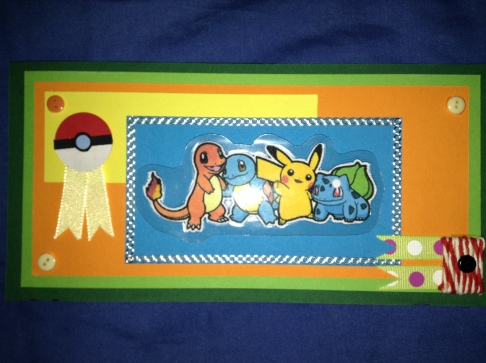 Now, how I’ve reached the state that I’m currently at. My main focus at the start of the year was organising my life in a general sense, having somewhere to live and being able to afford it being the top priorities. Without getting too detailed after I’d found a place to rent I was attempting to fund it through a mix of temp work and freelancing. That quite rapidly changed to a ‘full time-temp with some networking events thrown in’ kind of situation which I found really stressful from a money point of view, not knowing if I’d have enough to pay bills each month. Consequently when I was offered a full time office job starting June I decided to go for it.

I’m a few months down the line now and much less stressed about money thanks to having a regular paycheck, but there’s the question of what to do next. I’m going to save up to get some traditional 2D animation equipment, the Rostrum, Camera, Dragonframe etc that up until now has been too expensive to consider as an option which is a prospect I’m quite excited about. In the meantime the obvious thing would be to just create animations, which is what I intend to do, but I’m thinking a plan with some structure to it would be more productive than just a shotgun approach to making shorts.

Consequently I’m thinking of following up my 2014 Pokémon videos but in a larger ‘2016 season’ context; throwing myself into the 2016 Pokémon VGC and going to every event I can, providing regular summaries in a video format. This wouldn’t necessarily follow the same format as the two 2014 Nationals videos (I don’t think it’d be feasible from a time management point of view considering they took all summer) so instead it could be that I approach each update with a different visual or presentation style. It’d lead to both a regular stream of content, important for building a viewing base, as well as a lot of variety in terms of skills experimented with. Of course there’s nothing to stop me doing the odd short in amongst it all as well. I’m quite excited by the prospect of it at the moment.

At this point in time I don’t have access to any of the software I require for that (hence the earlier candle photos are all unedited ‘as taken’ photos) but if all goes to plan that’ll become available to me early September, coincidentally when the 2016 Pokémon season should begin. That’s along with Bristol Encounters Festival which should once again be a good experience (assuming I can get the time off to view the animation).

One thought on “Last few months and going forward”