It seems like just yesterday I was writing this up for last week, and it definitely doesn’t feel like a month since the degree show. Maybe the feeling that this week has just flown by is why it doesn’t feel like I’ve managed much of significance recently.

Part of that for this week might be that I’ve been down to Bath on two separate days; travel always seems to make the days zoom past. One of those trips I ended up waiting around in town for a couple of hours, and not having much else to do decided to buy Brian O’Malley’s new book, Seconds. Scott Pilgrim is one of my favourite games/films/series of books, so the next piece from Brian was always going to be worth a look. Whilst I haven’t finished reading it (after buying I went to the library and got distracted with other books XD) it’s definitely a great (if slightly predictable) read so far. In terms of the more physical design of the book, I really like the dustcover. It would’ve been so easy to do what loads of publications do and just print the same thing on both the main and dustcover, different approaches to both are always appreciated. We’ll have to see how the rest of it holds up, but I’m looking forward to it. 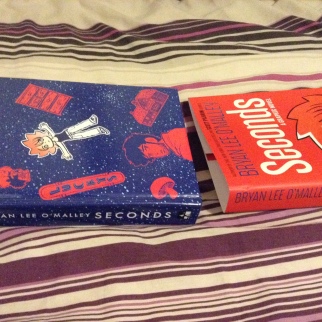 Other things that’ve happened, I’ve finished editing my scripts down now (the first one is now 6 pages reduced from 7, and the second is 8 from 11, which doesn’t sound like much but it’s about 2 minutes less video per page) and I’ve have began re-recording it. This project is taking far longer than I originally planned, I haven’t even begun the actual animating and it’s starting to get frustrating. The next project is definitely going to be something simple; minimal preparation, maybe experimenting with different media or something.

I was browsing around the internet, as you do, and came across this on CartoonBrew. It explains that previously the method YouTube used to work out whether an account was producing ‘premium content’ was to look at views per video, now it’s looking at minutes watched and how frequently video is uploaded in order to determine things like ad revenue. Animations aren’t something you can just churn out in the same way that you can other video content, or at least something (quality, length, etc) is going to give if you do. I don’t think it’s something YouTube has maliciously done, just something they haven’t really considered properly at all, and should definitely be. I’ve linked the video explaining it below.

I’ll leave you with this piece I discovered at the Holburn gardens. The gallery was closed, and there doesn’t seem to be anything on their website explaining, so it’s entirely a mystery. I like it.